1 Professor of Department of Geography and Urban Planning Tabriz University

Introduction
Tabriz city, the largest metropolis in northwestern Iran, has a privileged and strategic position in Iran due to its location on the political and cultural borders and in the transit route of neighboring countries (former the Soviet Union, Turkey and Iraq). In the current situation, due to the large number and variety of threats and the establishment of a large number of centers of gravity in this city, the probability of injuries has increased sharply; As a result of this, in order to improve the security of the city, by examining the vulnerability of the centers of gravity against potential threats based on the safety considerations of passive defense, the necessity of intervening is a very smart affair.
Data and Method
This research in terms of purpose is applied-developmental with a descriptive-analytical approach, and the method of collecting data is in the form of documents, library and field surveys (questionnaire and survey of 20 experts in the fields of urban planning, architecture and passive defense) have been. In the methodological discussion, first, the literature on the three concepts of threat, vulnerability and passive defense requirements in the field of urban planning in Iran and other countries, To identify assets and identify potential threats to those assets as influential factors in the vulnerability of gravity centers in the ten metropolitan areas of Tabriz, has to be studied. By selecting the latest questionnaire models prepared by the Passive Defense Organization of Iran, determining the grading of gravity centers and basic threat assessment of centers of gravity was done by provincial experts and experts of the statistical community. To determine the importance coefficient of graded gravity centers, using ANP network analysis and Super-Decision software (by determining the correlation and comparisons of standard pairs and indices by experts in the statistical community), unbalanced, balanced, and limited matrices were formed, followed by the determination of the importance coefficients of Centers gravity were determined; Then, the criteria and indicators of the research were prepared in a categorical manner. Spatial maps of all layers related to criteria and indicators in the GIS environment related to Arc-Map software were overlapped by applying the coefficient of importance and evaluating the appropriate distance from the objectives, criteria, and indicators with emphasis on the underlying threat. In the end, the vulnerability zoning map of the centers of gravity of the ten areas of metropolitan Tabriz was prepared.
Discussion and Conclusion
This research process is as follows:

Using a quantitative model to determine the levels of gravity centers of Tabriz metropolis, showed that out of 32 selected assets, 17 assets are classified as vital and sensitive centers and 15 assets as important and maintainable centers. The result is the existence of numerous vital and sensitive centers; By creating several important centers instead of a single vital and sensitive center and increasing the distribution of important centers in the city, effective action to improve the security of the city against military attacks is one of the key issues in discussing harm and threat in passive defense.
Based on the quantitative threat model affecting the assets of Tabriz metropolis, the threat of air and missile attacks was selected from the possible threats of sabotage, terrorism, cyber and people-centered protests, and missile and air attacks as the base threat. This threat has overshadowed its damage. The result indicates that this threat dominates the city over assets, so missile and air strikes as a basic threat in modeling, network analysis, and standardization of layers in the GIS environment.
By calculating the final map related to the vulnerability of ten metropolitan areas of Tabriz through fuzzy overlap functions in the ARC- GIS environment based on 22 effective indicators obtained from the model of determining the level of centers of gravity, in the form of 5 criteria of vital arteries, crisis management centers, military and law enforcement centers , Urban equipment and support centers, the basic threat of air and missile attacks and determining the significance coefficient of criteria and indicators were obtained in network analysis software using SuperDecision method of damage zoning in Tabriz. Vulnerability zoning of Tabriz city is classified into five classes: Zone with very low vulnerability of 13.7%, Zone with the low vulnerability of 9.5%, Zone with medium vulnerability of 23.5%, Zone with high vulnerability of 32.3% and Zone with the vulnerability of very much 21% of the total area of Tabriz metropolis. The result of this is far from the principles and considerations of passive defense and intensifies the spatial vulnerability of the city and requires the development of a strategy based on the principles of passive defense to eliminate the vulnerability of the city.
A very important conclusion that was obtained based on the average model of the nearest neighbors, the average distance expected from the centers of gravity of Tabriz metropolis is calculated to be 455 meters, while the average distance of existing centers of gravity is 264 meters, which indicates the ratio of the closest The neighborhood is 0.58. The result of this ratio and the p and z values of the model shows the cluster distribution of the centers of gravity of Tabriz. This is far from the principles and considerations of passive defense and aggravates the spatial vulnerability of the city.
Based on the studies of the SWAT model, the conclusion of evaluating the strengths and weaknesses of internal factors by studying and identifying vital, sensitive, and important centers in the metropolis of Tabriz city, indicates that the weaknesses of the city are more than its strengths. As a result, strategies should be formulated in such a way that their strengths are addressed to eliminate their weaknesses from the perspective of passive defense principles. The result of measuring the external environment to identify the opportunities and threats of the city in relation to the analysis of defense elements indicates that the opportunities for advancing the city are less than the threat, so strategies should be formulated in a way that can improve measures and repair existing threats and failures. Do different cities; The combination of the above two strategies indicates the development of defensive strategies as the main objectives of this study in the metropolis of Tabriz in order to reduce the vulnerability and threats to eliminate the vulnerability of the city.

Research Results
Some defensive strategies in order to improve the quality of passive defense in Tabriz are presented as follows:
1- Parallel access networks should be organized in accordance with the hierarchical system. Establish safe havens against threats at the point of rupture between tissues;
2- Create a suitable distance between the bridges and create complementary communication routes next to the bridges;
3- Underpass and metro networks should be organized for multi-purpose use and temporary accommodation;
4- Construction rules should be observed in the area of faults and rivers. Create proportionate functions in these areas;
5- Dilapidated and compacted tissues in the city center should be reconstructed according to the requirements of passive defense. Create green spaces and neighborhood parks to create temporary shelter spaces and blast waves;
6- Prevent the establishment of sensitive and dangerous centers inside dense tissues. These centers should be moved to low-density areas and open spaces that are close enough to residential areas;
7- The satellite cities of Tabriz should play a functional role in synergistic activities. These satellite cities play a role in establishing industrial activities and sensitive facilities for their dispersal;
8- To reduce the immigration rate of Tabriz city. Excess population to settle in suburban areas and interconnected cities;
9- To reduce the concentration of hazardous and polluting industrial activities in the west of Tabriz;
10- Using green spaces with tall and umbrella trees within the confines of facilities and equipment, in order to create natural camouflage and develop green belts and improve the quality of the environment;
11- Decentralization of the establishment of a large number of sensitive and important centers in the form of clusters in the central core of the city, especially in areas 8, 3, and 4, which should be done step by step due to the high cost;
12- Decentralization of population density from zones 1 and 10 based on the principles of passive defense;
13- Maintaining the proximity of endangered land uses with areas 5, 9, and 6 and part of 7 with relatively low population density, which are almost desirable and well located;
14- Basic action should be taken to remove military centers in the form of creating multi-purpose and recreational uses due to excessive accumulation of military, industrial, facilities, and urban equipment in the southern, southwestern, and northern suburbs of the city, which are endangered uses.

A basic action to remove a number of sensitive land uses and vital artery transfer centers (which are constructive and mobile urban elements) from sparsely populated areas 2, 1, 9, and 5, in the form of creating land uses. Multifunctional and recreational, to be done. Transfer some of them to areas 6, 4, 3, 10, 8, and part of 7 (areas 10, 8, and to some extent 4 have a dense population);

16- Basic action to adjust the ignition uses due to more accumulation and lack of open and green space in the central areas of the city, and 8, 2 and to some extent 3;

Although areas 6, part of 7, and to some extent 4 have the most open and green spaces, the existence of large industrial uses with transnational products (tractor and machine building) and the airport has threatened these areas. This requires preventing the development of the city towards these areas;

18- Due to the circular structure of Tabriz, the existence of unsuitable arterial networks in areas 1, 10, and 8, which have a high population density, have small and old parts, and have a suburban texture of the city. In these vulnerable areas, safe points and networks of appropriate thoroughfares should be established and repaired in order to guide the population in times of crisis;

Lack of optimal distribution of relief and hospital centers in the city can be seen. So that the central saturation areas and suburban areas, including areas 9, 5, 6, and to some extent 3 and 7 do not have this use. This makes it difficult to provide optimal service operations in times of crisis;
Necessary action should be taken regarding the camouflage and concealment of urban facilities with high identification capabilities, such as high-voltage power substations, gas pressure reduction substations, and water tanks that are distributed in urban areas;
Establishing several important centers instead of single sensitive centers and adopting safe spaces in them is one of the key measures to improve the level of security in military attacks. 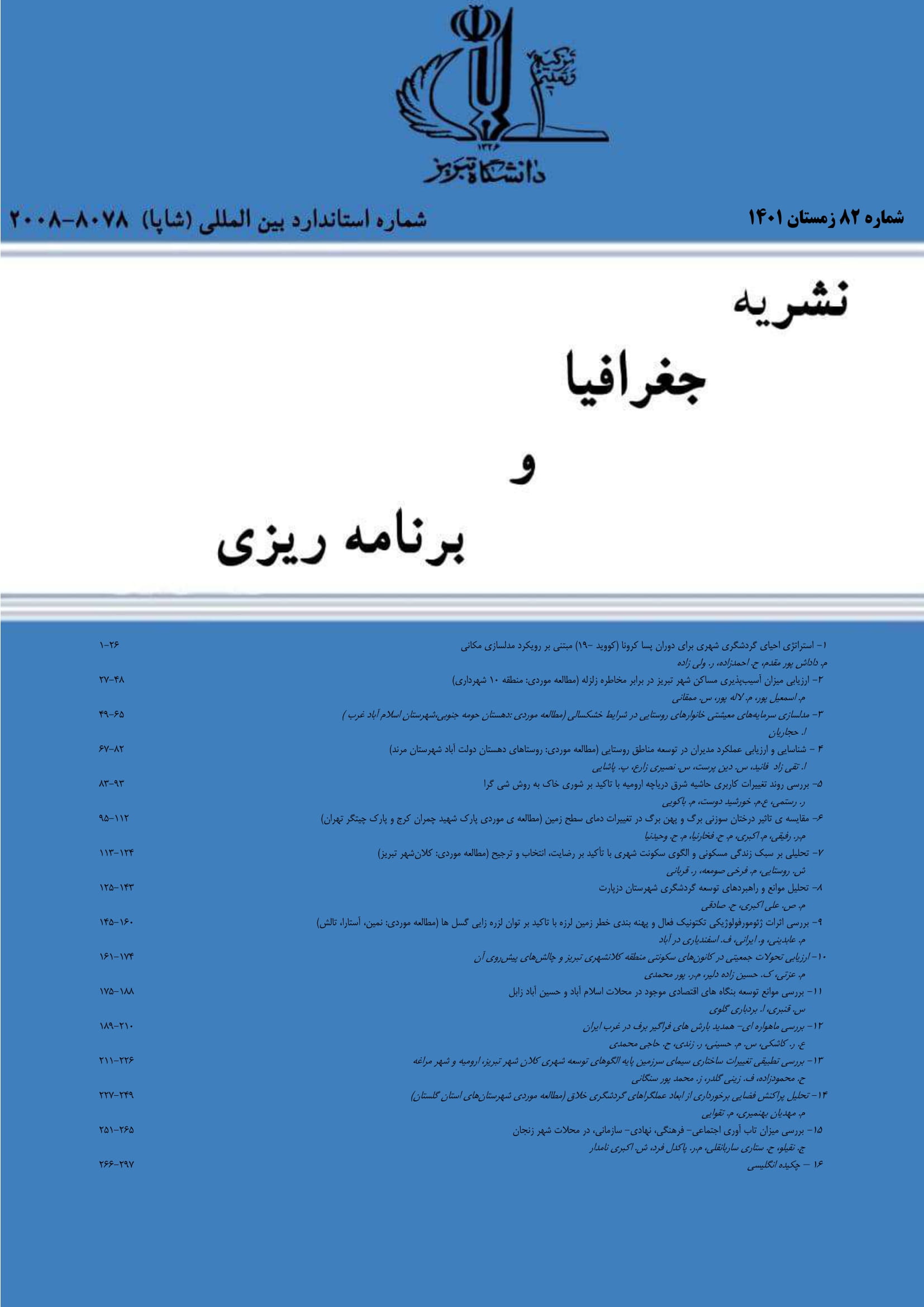